The Good Judgment Project is a group that describes itself as “harnessing the wisdom of the crowd to forecast world events.” Using open minds and fact-based decision models, the project outperformed the intelligence community in predicting geopolitical events during a four-year competition that ended in 2015. By finding similar events in history, updating their beliefs when provided with new information, and exploring the ways in which they could be wrong, the team of so-called “superforecasters” exceeded all expectations.

Predicting where a stock will be in the future requires all of these attributes as well. Every prediction represents a point in time, and making an educated guess about where a high-growth company like Teladoc (NYSE:TDOC) will be in five years needs to come with a lot of caveats. Still, there are useful comparisons and information we can use to make that educated guess.

Though many initially resisted telehealth, ever more insurers are now embracing the technology’s ability to bring care to those in rural locations, increase use by members who would not normally take the time to have routine checkups, and enable clinicians to efficiently monitor and support patients with chronic conditions.

Increasing telehealth usage was clear in Teladoc’s revenue growth even before the disruptions of the coronavirus. Although the company was not profitable, management had it on a path to profit, with the operating margin (profits after paying for salaries, sales and marketing costs, and overhead like legal fees) having steadily increased over the past few years. 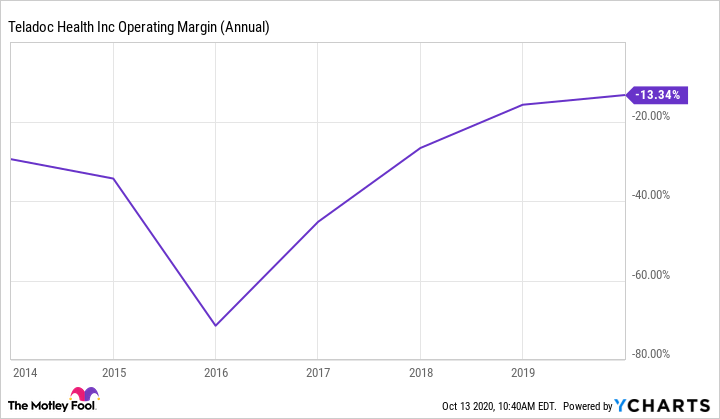 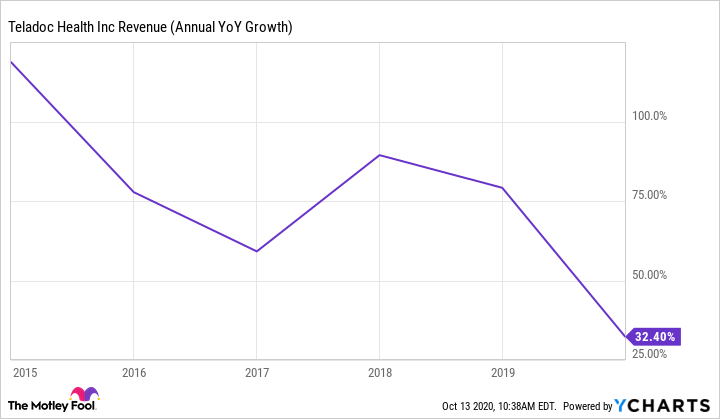 Subscriptions and visits are what generate the company’s revenue, so key indicators of sustainable growth include the number of members covered under the subscription agreements and how often they access Teladoc’s services. These numbers were also both trending higher pre-pandemic, with subscription members more than doubling from 2016 through 2019, to 36.7 million. Utilization, the percentage of members who accessed the platform, saw a similar increase during those years, from 5.4% to 9.5%.

But in 2020, the coronavirus brought office closures and mass fear of public indoor settings, rapidly accelerating the adoption of telehealth and propelling Teladoc’s stock to a 177% gain so far. This rise reflects the reality of the business; members and utilization have skyrocketed to 51.5 million and 16%, respectively.

Being human often means overreacting to what is happening in the moment. It’s a simple bias that can cloud any decision, and even the smartest among us can fall prey. In the midst of the financial crisis in 2009, McKinsey — a consultancy that employed what were widely considered some of the smartest people around — predicted that premium brands that were expecting a return to normal would be disappointed. They believed the recession had fundamentally changed consumer behavior. A decade later, it’s clear that that prediction was way off. People still gladly pay more than $100 for yoga pants, $1,000 for an iPhone, and $100,000 for an electric vehicle.

Some dramatic events don’t change consumer behavior entirely — instead, they can accelerate changes that are already happening. For instance, homeownership among younger Americans had been declining since 1960, but the Great Recession accelerated that trend. Telehealth is likely a similar story: It was clearly gaining popularity and becoming more accepted by patients, clinicians, and insurers prior to COVID-19, but its adoption has grown rapidly out of necessity. As those trends abate, investors wonder where Teladoc will be in five years.

Although telehealth visits ramped up early in the pandemic, that trend did not persist. Remote visits accounted for nearly 70% of medical encounters in the spring; by mid-July, that number was back down near 20%. This is still an astronomical climb from February, where the number was closer to 0%. Speaking of predictions, most doctors believe less than 10% of their visits will be virtual by next year. But if management has its way, by then Teladoc will be more ingrained than ever in the healthcare experience.

Teladoc has used acquisitions in the past to expand both its network of physicians and the services it offers. The latest and largest example is its $18.5 billion acquisition of Livongo Health (NASDAQ:LVGO) and its 600 employees. That’s more than $30 million per employee, meaning Teladoc management is clearly betting on Livongo’s technology and the growth opportunities possible in chronic disease management.

This acquisition is also an effort to bring more revenue-generating services onto the platform, as adding to the U.S. membership ranks will get harder. Teladoc has 51.5 million members to Amwell‘s (NYSE:AMWL) 80 million and MDLive’s 40 million. In all, those three competitors already reach more than 170 million of the 243 million Americans with health coverage. Teladoc’s membership doubled from the end of 2015 to the end of 2019 — doubling again will be hard without expansion both geographically and in services offered.

Management’s acquisitions have set the company up for continued growth worldwide; Advanced Medical, acquired in 2018, offers services in Latin America and the Asia-Pacific region, while France-based MedecinDirect was purchased in 2019. Both helped drive international subscription revenue to 18.5% of total sales in the six months ended June 30.

For its part, Livongo’s sales have been growing consistently, up more than 120% over the past two years, with the latest quarter being no exception. Given Livongo’s trailing-12-month revenue of $258 million and Teladoc’s $716 million, the combined entity will have almost $1 billion in sales.

Expect this expansion in geography and services to continue over the next five years. But while Teladoc’s revenue will likely continue growing in the 30%-per-year range, the price investors are willing to pay may revert to a pre-pandemic level. Before the pandemic, Teladoc’s market capitalization was typically between 9 and 12 times annual sales. Recent excitement has pushed that to near 24 times sales. If the excitement wanes and life returns to normal, any growth may be consumed by contraction in this price-to-sales multiple.

Taking a lesson from superforecasters, we should ask why things may turn out differently than our expectations. For one, if widespread adoption of telemedicine persists at pandemic levels, the entire health system will have to reconfigure itself in order to leverage platforms like Teladoc’s. This seems unlikely, as in-person office visits have picked up through late summer and early fall. But a second wave of cases and hospitalizations could reverse this trend.

Another thing to note: Amwell is currently the exclusive telemedicine provider for major health records company Cerner (NASDAQ:CERN). If Teladoc’s offerings in health monitoring are compelling enough to penetrate this relationship, the company could see another jump in growth as it takes market share.

Lastly, if the integration of new services complicates Teladoc’s relationships with existing customers or makes it more difficult for clinicians to use the platform as they are accustomed to, this could create a push for an easier-to-use alternative.

With a current market capitalization of $33 billion, the combined Teladoc-Livongo entity is likely to grow its sales by $3 billion to $4 billion in the next five years without much stock appreciation. As life returns to normal (we hope) and the market reverts to its historical valuation of the company, investors would be wise to avoid Teladoc at current levels.